The Archdiocese of New Orleans bankruptcy filing won’t silence the voices of its victims of sexual abuse.

If you are a silent survivor, it’s time to tell your story.

The Archdiocese chose protecting its finances over reparations to its victims. But there is still a path to justice.

Herman, Herman & Katz, LLC has been at the forefront of seeking justice for the silent survivors of the Archdiocese’s sexual abuses.

Herman, Herman & Katz is responsible for 90 percent of all filed cases of sexual abuse against the Archdiocese and has reviewed thousands of pages of documents relating to more than 23 cases. The firm has also issued subpoenas for records and deposed the Archdiocese’s archivist and IT representatives to track down the reported secret abuse files. The firm is committed to getting the voices of silent victims heard. The Archdiocese has found a new judicial forum and a new judge, but it cannot evade the developing District Court record that documents its liability.

Herman Herman & Katz is committed to providing an opportunity for any victims and survivors who have remained silent about sexual abuse by the Archdiocese’s clergy to share their stories confidentially. It’s going to take unified voices to be heard loud and clear.

The bankruptcy of the Archdiocese is about the sexual abuse victims of its clergy.

Hundreds of children were raped, sodomized, and physically tortured by the clergy of this Archdiocese. While the abuse lasted for generations, the Archdiocese of New Orleans buried allegations, moved rapists among its parishes, and bullied most victims into silence. Archbishops Philip Hannan, Francis Schulte, Alfred Hughes, and Gregory Aymond had a sacred duty to protect the children of this community and they utterly failed to do so.  The Archdiocese’s misconduct is the prime mover of this bankruptcy.

The Archdiocese chose to protect its accounts over accountability.

In state court, victims were on the path to the truth. They filed lawsuits, named their assaulters, sought documents related to their claims, and moved the District Court for testimony. Depositions were taken, documents were exchanged, and the Court conducted dozens of hearings. With legal assistance, the victims had started to reclaim the agency that was taken away from them as children. The Archdiocese again deprived them of this agency by filing for bankruptcy. Its filing was designed to stop Archbishop Aymond’s May 28th deposition and block the publication of thousands of pages of documents.

The Archdiocese is misrepresenting its assets.

The Archdiocese reports the total value of its assets to fall within the $100-$500 million range. However, the real and personal property of the Non Debtor Catholic Entities and the Archdiocese exceeds $2.1 billion.* The Archdiocese will seek reorganization around its reported assets–not the total amount of assets it has insured.

The Archdiocese has secret files concerning sexual abuse by its clergy.

Abuse survivors have uncovered the Archdiocese’s decades of pattern and practice only by way of contentious legal battles in state court. Archbishop Aymond was to be deposed to help determine whether the Archdiocese engaged in fraudulent concealment of the sexual abuse claims. The Archdiocese’s archivist and IT representatives have been deposed to locate the various secret abuse files reportedly kept by the Archdiocese in a safe locked inside a vault and in the Archbishop’s locked desk drawer.

Why speak out now?

Many victims of sexual abuse experience intense suicidal thoughts and suffer from drug addiction–no matter how long ago the incident(s) occurred. These victims are survivors who have suffered and fought through the pain inflicted on them as children. Studies have shown that sexual abuse victims do not even tell loved ones or therapists of the abuse for the first time until their mid-40s to 50s or even later. The average age at which a victim comes forward is 52.

The survivors of sexual abuse by the clergy are adult witnesses of crimes against the children of the New Orleans community. They are not “financial and operational difficulties,” as the Archdiocese claims.* Its victims deserve explanations about what the Archdiocese knew, when it knew it, and what it willfully did with that knowledge. The time for transparency and truth is long past due. On May 7, 2020, attorneys for the victim survivors sent a letter to counsel for the Archdiocese of New Orleans demanding information regarding various benefit payments, potentially totaling hundreds of thousands, made to perpetrator priests.
[Click here to learn more] 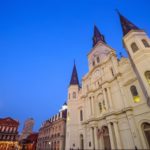 TO ALL STAKEHOLDERS AND PARTIES IN INTEREST:
This bankruptcy is about the sex abuse victims. Hundreds of children were raped, sodomized, and physically tortured by the clergy of this Archdiocese. While the abuse lasted for generations, the Archdiocese of New Orleans buried allegations, moved rapists among its parishes, and bullied most victims into silence. Archbishops Philip Hannan, Francis Schulte, Alfred Hughes, and Gregory Aymond had a sacred duty to protect the children of this community and they utterly failed to do so. The Archdiocese’s misconduct is the prime mover of this bankruptcy.
[Click here to learn more]